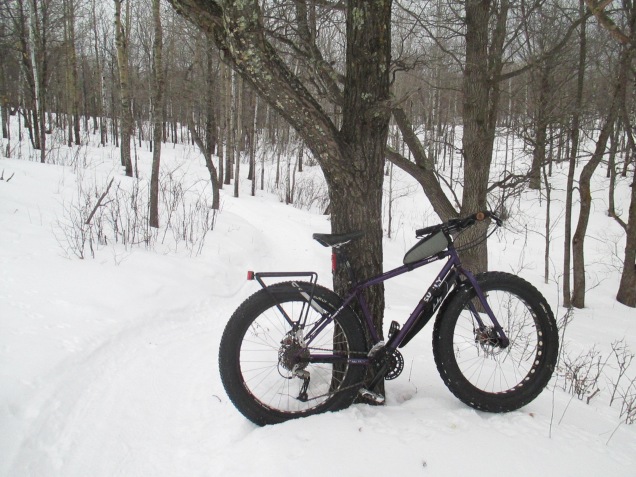 I’ve been really missing my bicycle commute. The commute I did daily for the past 12 years. Since starting my new job I’ve been using the local city bus service to get back and forth. I never thought I’d work at a workplace that totally befuddled me when it came to finding a secure place to lock up my bike. I thought I had a plan. On further thought I decided I wasn’t comfortable with the situation. It wasn’t the location so much, a loading dock platform on the side of the building. It was the amount of activity that would occur around the spot I’d be locking. I’ve been watching it closer lately. It’s doubles as an outdoor smokers lounge and a loading dock. I would have to squeeze my bike in between the chairs the smokers leave out there. It just wasn’t ideal. Unless I come up with something else I may continue to commute by the bus.

Once Spring arrives my Brompton folder may come into play. I have spotted an indoor location I might be able to leave the Brompton. I choose not to ride it in the winter time cruddy conditions. Once the streets get cleaned up in late April I’ll take a look at that.

So what does this have to do with the Subject of the post. Nothing really, except I’ve been itching to get out on a bike since I haven’t been riding to and from work. It’s really strange for me. I’ve been bike commuting so long. So when I finished with work at 2:30 this afternoon I came home and decided I had to get out. The winter biking trails were in great condition over the weekend. That’s about to end as warmer weather and rain is moving in. That’s something you don’t hear around these parts in February.

The no-no I’m referring to is a trail rule I’ve been hearing since I started riding the new mountain bike trails. You should not be on the trails in the winter when the temperature is above freezing. If I understand it correctly the snow on the trails become soft and can be easily damaged. I have to disagree with this rule. It should say, the trails may become soft when the temp is above freezing. Today was a good example of the temp being above freezing with no danger of damaging the trails. After last weekends bitter cold the trails have become very firm. Even with a warm-up the night time temps have been well below freezing. But the biggest factor to come into play today was the lack of sunshine. We had very dense cloud cover.

When the sun shines this time of year it can increase the softening up of the snow in a hurry when it hits the trail directly. Today with the dense cloud cover there was no softening of the snow. The trails were as firm as if it was 25 degrees colder. My tires were floating on the trail and never left any marks.

Tomorrow and this weekend will be a different story after some rain and temps in the 40’s. If we have an early end to winter, this could have been the last snow ride of the year. Some years it goes well into April. As recent as 2012 the snowbiking ended about this same time in February. It’s rare, but it can happen. You just never know. I try to make the most of it while it’s around.