There’s a new City Park at the end of our block. The Duluth Climbers Coalition has worked with the city to turn an abandoned rock quarry into a winter destination for ice climbing. This happens to be at the top of the city block we live on and across the train tracks that carry ore trains in and out of the Duluth Harbor. Up until now it’s been used by locals for walks, dog walking, teenager parties and in the winter I have seen ice climbers on the walls of the old quarry. Personally I’ve used the quarry for hiking, walking and snowshoeing. I never knew who owned the property or if I was allowed on it. Turns out the city owned most of it and acquired another 10 acres to make it a park. The climbers club in cooperation with the city is developing it into a park for all. It will feature climbing. They plan to put in a water system to farm ice on the wall. There is naturally occurring ice, but framing ice will give them more stable and abundant ice climbing routes.

The part of the plan I am most excited about is the part that develops hiking trails and mountain biking trails to link with the trails higher up the ridge. This will give my neighborhood complete trail access to a system of hiking and biking trails that connect with the rest of the city. I will only need to ride or walk one block of roads to access the trails I am already using. When we bought this house in 2003 there was no hiking or biking trail systems. Now there will be access nearly from our front door. 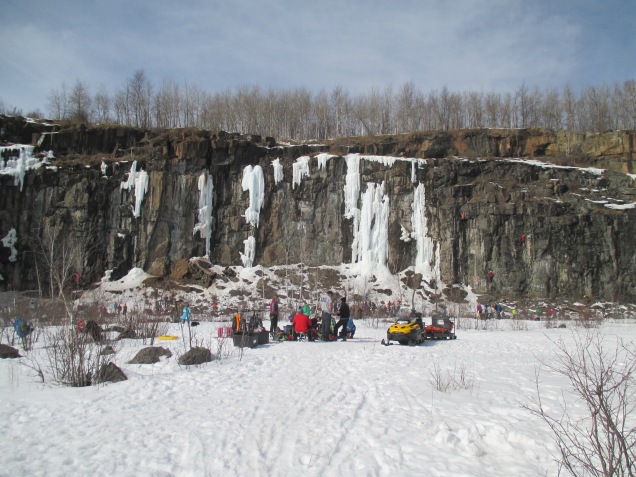 Yesterday was the first Annual Duluth Ice and Mixed Fest put on by the climbing club. It was an extremely unusual weather day with temps in the low 50’s It was a pleasant day to stand around and watch the ice climbers. The Fest also offered fatbike demos, snowshoeing,  Frisbee golf demos, and ice climbing clinics.  I was very impressed with the enthusiasm of the climbing club. To put on an event like this when the “Park” has not even been developed yet was amazing. Plus they went out of their way to make it inviting to people in the neighborhood. 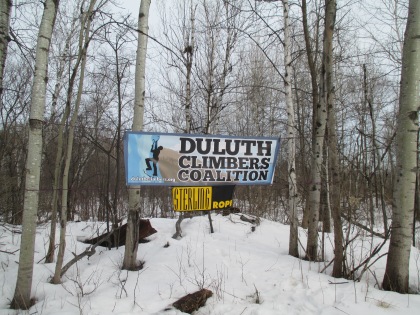 2 thoughts on “Watching the Ice Climbing at Quarry Park”