I’ve spent the last 12 years learning to commute in every weather scenario Mother Nature could throw at me. I’ve commuted in temperature extremes from -32degF to 104degF. In torrential rain, ice storms, snow storms, a few blizzards, and high winds. I’ve learned what works for me in terms of equipment, clothing and accessories. For example (above), my first Gates Belt drive + IGH experiment. I often write about equipment and clothing. However, there are accessories I use everyday I seem to overlook or take for granted. This post is about one of them.

My favorite accessory item came about to solve an issue I was having with my heavy winter gloves, and to some extent my winter riding boots. On a typical winter day I would adjust how I would dress for the day based on the morning weather. During the seasonal swing months of March and April it’s not unusual to have a temperature differences of 20 or 30 degrees from morning to afternoon. Often this would mean I would be appropriately dressed for the morning commute and overdressed for the afternoon commute. I could easily leave off a layer on my torso, legs, and head. This was not always an option for my hands or feet. I would wear the same gloves home even if they were too warm. This meant my hands would perspire and the gloves would absorb this perspiration. The next morning I would find the gloves did not dry completely. The inside of the gloves would be wet and clammy.

I had a similar issue with boots or shoes. During the Spring melt or during rain storms there is only so much water even the best fenders can stop. Fenders are great for keeping the water and grit off most of you. But feet aren’t always protected from even the longest fenders. Water spray can come around the fender and still soak your feet. Water can seep in the top of boots and shoes as well. Again, the same as the gloves, I would find my boots not drying completely overnight.

And then I found this on the REI website: 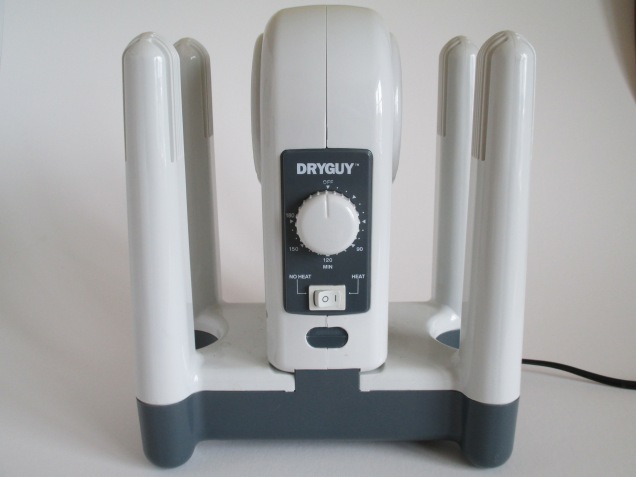 It’s the DryGuy Boot dryer. It’s been redesigned a bit since I bought mine. But is essentially the same item. I really had a hard time with the price point. I tried a couple different boot dryers in the $15-$20 range. They barely worked. They didn’t have a heated setting and neither lasted an entire year. I finally broke down and bought the DryGuy several years ago. It has become my most used winter accessory off the bike. Sure it dried my wet and damp boots and gloves. No more clammy gloves or boots in the morning. It also stopped any bacteria growth and increased the time between washings on my gloves.

The biggest plus of buying this boot dryer was something I never thought about. I keep all my gloves and boots in our basement. The temperature of our basement in the winter is about 55degF. Or more like 52degF for the boots sitting on the floor. Putting on boots that are 52 degrees to ride in much colder conditions doesn’t give your feet much chance of staying warm. I used to bring the boots upstairs every morning and set them next to the hot air register to warm them up. After buying the DryGuy I started putting my boots and gloves on it about 30 minutes before leaving for work in the morning. What a difference it made leaving the house with warm boots and gloves. Now I always leave the house with warm hands and feet. My feet and hands stay warmer longer when starting out with warmed gloves and boots. You’re not expending any of your heat to warm the items you’re wearing. I can’t even imagine putting on cold gloves and boots now.

When I began this blog I started to write my series of posts on Fourth Season Skills. So far I’ve only written three posts. I hope to continue this series despite the fact that many of you are experiencing Spring-like weather. Look for them throughout the month of March.

7 thoughts on “One of my favorite winter biking accessories.”