I talk about the weather quite often on this blog. We’re in such a unique sub-climate compared to most of the the lower 48. Our weather is different from what else is going on around the rest of the country, most of the time. However, it’s usually our early winters, or our harsh winters, or our late winters. We are never the hottest place in the nation….until today. Two Harbors on the map above is 20 miles northeast of Duluth. We broke a record high temp by 11 am today. The record was 82degF set back in 1934. The new record finally settle in at 91degF. Ninety-one degrees and the leaves weren’t even out this morning. Spring was just revving up. And then WHAM…..it’s summer. Not only was it hot, but extremely low humidity. I heard our air was drier than Phoenix Arizona’s was today.

I got out for a short 12 mile ride on my Ellis today. It’s taken me most of my life to realize I need a couple of weeks to acclimatize to weather above about 82degF. I used to just drink lots of water in hot weather and thought that it would save me. Not so. My body overreacts to heat when I’m not yet acclimatized to it. I can sweat buckets of water. And I can sweat it out at much faster rate than I can replace no matter how much water I drink. I can’t tell you how many times I’ve had symptoms of heat exhaustion. Then it takes me several weeks to return to normal. So today I took it very easy. I drank two bottles of water during the hour ride. I think I’m okay this time.

It was nice to see the rapid progress on the new recreational trail link between North 63rd Ave West and the Zoo. Almost ready to pave. I am so excited about this mile and half extension. It will allow me to completely avoid a busy four lane county road. It follows a route I know well from winter biking it. This is an old railroad bed. Most of it goes through an abandoned rail yard. Up until now it’s been used as an official snowmobile trail in winter and illegal ATV/motocross trail in the summer. I’m going to start calling Duluth “trail town”. Because every where you look new human powered trails are being built. 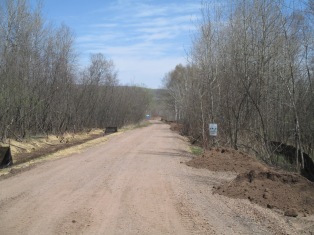 (As I was writing this a line of severe thunderstorms came through, dumped rain, and dropped the temperature from 91 to 66 in about 20 minutes. Crazy stuff!)

4 thoughts on “We’re hotter than you!”