Summer evenings. The time between dinner and sunset. When the sun fades and the heat of the day lingers. A hint of cooler air appears in pockets of air as you move about. As a child this time of day was spent outdoors. Friends and neighborhood kids would be out too. We’d spend this precious time running around, playing, and riding our bikes. Burning off that last bit of kid energy before bed time. There was a sense of freedom and being totally in the moment.

Some how I lost that feeling, the ability to enjoy the moment. It was around age 13. I had started taking my bicycling to new levels. I was spending my summers training and road racing. Evenings became the time for recovery and sitting around. A week ago my wife and I were sitting on our porch enjoying the evening. A thought popped in my head. I looked at my wife and announced I was going for a bike ride around our neighborhood. I only had an hour before sunset and it was a beautiful evening. I didn’t change into “biking clothes”, I didn’t fill my water bottles, I didn’t put on cleated bicycle shoes. I didn’t put together a repair kit and pump to carry along in a bicycle bag. And here’s the big one, I didn’t grab my cell phone and shove it in my pocket. I simply got up, walked inside grabbed my Brompton and went.

I rolled away from my house with no destination in mind. I purposely tried to take the quieter streets, or streets I don’t normally take. As a top priority, I took any paths I came across. I’d go down paths just to see where they took me. Every neighborhood has hidden paths that connect streets to other streets. Some are dirt, some are paved trails. Paths can only be found and used when on a bike or foot. Growing up my neighborhoods didn’t have alleys. Alleys can be a great way to get around a neighborhood. My neighborhood I live in now has alleys.

I had so much fun that night I decided to do it again last evening. Although, I did take my phone so I could take some pictures this time. Here’s a link to the route I rode: //rwgps-embeds.com/trips/10542401/embed 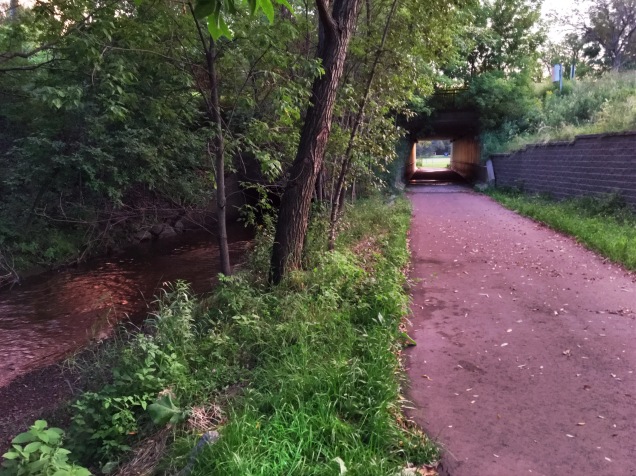 There’s nothing better than a path through a wooded ravine with a creek next to it. I remember thinking as a kid that these kind of paths were secret. Only kids knew about them.

The Brompton is a great bike to bring back this kind of feeling. Although it’s an “adult” bike, the small wheels remind me of bikes I would have ridden as a kid.

Last evening I did something I never do as an adult. When I reached the main drag through West Duluth I rode on the sidewalk. I never ride on sidewalks. At this time of the evening I had the sidewalks all to myself. I looked into the windows of closed shops as I rode along. I rode with my eyes wide open. I noticed little businesses I didn’t even realize were there even though I’ve ridden down this street a thousand times on a bike and in cars.

I felt like a kid again. It’s a shame it took me 40 years to slow down and feel this way. I think I’ll try to do this more often.

3 thoughts on “Bringing back childhood memories while riding a bike.”