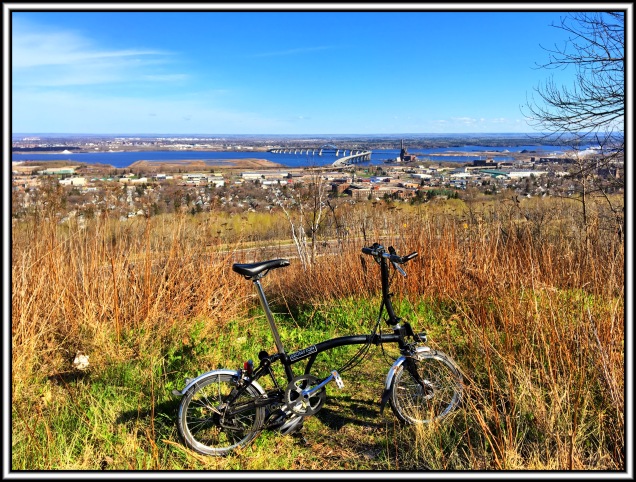 My last post mentioned I was so happy to get in two rides over the weekend after being down with a cruddy cold for two weeks. I had four good days where I felt perfectly normal and healthy. And then, the cold symptoms started coming back mid-week. I was so upset.

Today I was feeling like the cold wasn’t going to repeat itself and was feeling good enough to get out for ride. A short one, but a ride none the less. I realized it was May already and I had yet to ride my Brompton in 2017. I really enjoy this little folding bike and look forward each Spring to getting it out. I tend not to ride it in winter to spare it from all the salt and sand on the roads. I have other bikes for that.

As always I thoroughly enjoyed being back on this fun little bike. As I was tooling along, climbing a small hill, and minding my own business I heard the familiar sound of mountain tires rolling up behind me. I didn’t give the rider the satisfaction of acknowledging his presence by glancing over my shoulder because it was obvious by the sound of his tires he was putting in a big effort to catch me and overtake me on the uphill. I maintained my leisurely pace and let him catch me. When he had finally pulled up alongside me I looked over and made eye contact.

This is where it always gets awkward for me. As a true introvert I am woefully incapable of making small talk with people I don’t know. I can do a friendly greeting and “beautiful day out” type stuff. Anything beyond that and I get tongue tied. This guy was on a fatbike of some type with a set of 29er wheels. He says to me, “Those tires roll good?” I have no clue from what perspective he’s coming from, which throws me. Is he making a statement about my “silly bike with small wheels”. Or is he intrigued by my Brompton. I don’t know. So I say the first thing that pops into my head, “Oh yeah” I say. And then, the awkward silence ensues. It feels like an eternity. I don’t know what to say next and he doesn’t say anything. So he just pulls away and rides off. I don’t know if I came off as an asshole, or if it was just as awkward for him as it was for me. In the end it was just all kinds of uncomfortable. Yet the entire episode lasted all of 20 seconds.

What can I say? I’m not good at conversation.